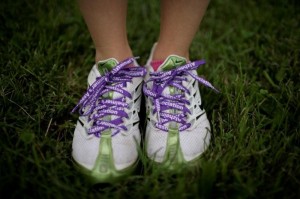 Sometimes we get lucky. We live long lives with few interruptions. Maybe, a skinned knee or a mild flu now and then. Maybe some osteoarthritis that wicks its way up from your toes to the tips of your fingers—nothing serious nor very painful.

Then, there are those moments that intersect with life like some crazy tornado that rips our roof away and exposes us to our fragility. Our humanity. Those are the heart events, the strokes, the broken hips—Alzheimer’s disease. We do our best to avoid those tornadic occurrences that leave us broken and helpless. We exercise, eat our broccoli, hold our tongue to the side of our mouths as we work out the Sunday crossword puzzle. We drink our red wine. We watch our weight.

But for those among us who develop Alzheimer’s disease, there seems to be no rhyme nor reason. There is no preventative. Most sadly, there is yet no cure.

September is World Alzheimer’s Awareness Month. As of 2010, there are an estimated 35.6 million people with dementia worldwide. By 2050, it is projected that this figure will have increased to over 115 million. Much of the increase will be in developing countries. Already 58% of people with dementia live in developing countries, but by 2050 this will rise to 71%. The fastest growth in the elderly population is taking place in China, India, and their south Asian and western Pacific neighbors.

So, come and join me. Come walk with me. I’ll be walking to end Alzheimer’s on November 5th in Phoenix, Arizona. Lace up your shoes and come with me. Give. Generously. If you don’t know someone yet with Alzheimer’s, the sad news is that you will.

We need a cure—and you’re the hope.

2 thoughts on “Come and Walk With Me”