Auburn McCanta is a national IPPY and Benjamin Franklin Award winner for Popular Fiction, and a Pacific Northwest girl gone southward. She currently serves as an Ambassador for the National Alzheimer’s Association and donates ten percent of all author’s proceeds toward research for finding a cure or positive treatment for Alzheimer’s disease.

After growing up literally surrounded by her mother’s prized Portland roses, McCanta now lives in Phoenix with her husband, one huffy cat and one giant and impossibly irresistible Labradoodle. She’s become accustomed to the Sonora Desert with its occasional neighborhood coyote and scorpion rout.

After the 1994 removal of a golf ball-sized brain tumor, McCanta found writing a source of therapy. Her early work appeared in Cruising World, Hobie Hot Line, California Cat and the Sacramento Bee and Arizona Republic newspapers. Much to her amusement, McCanta’s first work of full-length fiction received a fourth place award from the National Writers Association.In 2007, her second novel was a Pacific Northwest Writers Association literary finalist.She was honored in 2008 with a third place award for poetry by PNWA. The national IPPY and Benjamin Franklin found a home deep in her heart.

Prior to the 2008 presidential election, and because of her writing style, McCanta was selected from among thousands of hopefuls by Huffington Post to serve as a Citizen Journalist. She now contributes as a national Ambassador for the Alzheimer’s Association. She is currently working on a second novel, this time a mystery improbably written from within the mind of a schizophrenic sleuth and her many “voices.” She also blogs now and then at AuburnMcCanta.com.

When not writing or undergoing yet another surgery, McCanta enjoys the tradition of her distant Irish heritage by eating potatoes.

All the Dancing Birds is her debut novel.

About All the Dancing Birds

From Auburn: Why write about Alzheimer’s?

I’m a brain tumor survivor of nearly twenty years. I still remember how my hands trembled in my lap as I received the initial kick-in-the-gut diagnosis that I had a tumor, a little larger than a golf ball, squatting deep and ruinous inside my brain. I was told to prepare for a number of terrifying outcomes, each one more frightening than the one before. Full recovery from a brain tumor like mine is rare. 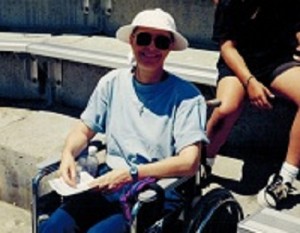 That’s me, just a few days after my brain surgery

Nevertheless, with a gifted surgeon, a great deal of love and support, and the luck to have inherited my grandmother’s stubborn Irish streak, I was given the gift of a shiny new life. During the months following surgery, I taught myself to walk again, to talk again. To live again.

It seemed only natural, then, that I would develop an interest in other brain diseases. As time went on, I watched family members and friends who suffered from dementia. And it dawned on me one day—like lightning in a bottle—that they had not lost the ability to think, even if it wasn’t clear to the world around them. 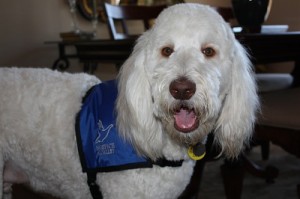 This is our labradoodle Wilson, who accompanied me to Alzheimer’s care facilities twice a week as a pet therapy dog. His warm fur was like magic.

I compared the days after my brain surgery, when I was unable to intelligently communicate, to the latter days of my loved ones with Alzheimer’s. In recalling how difficult it was to locate and form words (a condition called aphasia that still strikes me now and then), it occurred to me that even in my darkest times, when my reasoning was skewed or my thoughts were slow in forming, I nevertheless retained the ability to think—however small those thoughts might have been. I retained a lively imagination and, even when I felt jumbled with medication or all those blind alleys I wandered within the quiet of my mind, I still never stopped thinking. Similarly, I’ve watched dementia patients (who seemed silent and unapproachable) light up when someone stops, takes their hands, looks into their faces, and croons a soft hello.

It’s the notion that thought does not cease—regardless the circumstance—that I wanted to fictionalize.

Although I allow Lillie Claire’s thoughts to incorporate intelligent and robust language until the end (obviously, I took a great deal of literary license), she wanted it that way. Characters are like that for writers—they can be pushy! Lillie Claire wanted her story to be written as if she were fully able to speak to the heart of each reader. She wanted everyone to know that even when she was silent, or had thoughts that didn’t exactly capture reality, or when she appeared not to have thoughts at all, she was still able to feel pain and joy. She was always able to think something.