I can’t do it.  I can’t write in the margins of a book.  I can’t allow my hand to fold down the corner of a page until it resembles a fragile origami bird wing.  I can’t make pen marks alongside words that took a writer a year or ten to write and then struggle through the daunting process of publication until the book, at last, reaches the perch of my hands in all its pristine glory.  I can’t overpower the fragile scent of paper with the pungency of a highlighter.  I simply can’t do it.

The act of writing alongside the words of another seems so presumptuous to me … as if my adding to, or even disagreeing with, the work of another writer … would be an insult.  Perhaps it could be close to an assault.

Yet, isn’t that what life gives us?  Margins in which to add our stories alongside the stories of others?  Isn’t it?

Maybe life is meant to be examined more closely within its fragile margins.  At its best, life is often gloppy and snotty and messy and filled with many, many ookie moments that can only be fully unfurled when compared alongside the words of others.  Maybe that’s the purpose of books — to give us little spaces of white begging to be filled with the elegance of conversation on paper.  There are words to circle, phrases to highlight.   Windows of insight on which to pencil our own ah hahs.

The other day I sat in a coffee shop, watching a woman unabashedly writing in a book.  With wide eyes, I watched her color whole passages with a fat, hot pink highlighter.  There was such a look of delight spread across her face, I thought she would die of ecstasy, right there on top of her half-consumed Venti flavored coffee thingy-whacky and her pineapple pumpkin raisin scone.  In that moment of observation, something occurred to me.  Instead of being horrified, I thought of myself doing the same thing.  I pictured my tongue planted in the corner of my smiling mouth, a bright pen splashing words in the margins of a favorite book.

I thought of being brave.

I looked down at the book in my lap, Life is a Verb: 37 Days to Wake up, Be Mindful, and Live Life Intentionally by Patti Digh.  In the first pages of this gorgeous book, the author tells her readers, “I hope you will find yourself in the margins, between and beneath the words and perhaps if I’ve done my job, in them.”  Every page is beautifully designed with really, really wide margins, delicious words, the quotes of notables swirled throughout … and luscious graphics, photos and artwork on which we’re invited — no, challenged — to join in a delightful conversation.  Like sitting down with a girlfriend over coffee.  We’re supposed to WRITE IN THE BOOK.

Life is a Verb is meant to be a rolling conversation, rather than a pristine shelf book.  It’s designed to be messed up, coffee-stained on, dog-eared and cracked wide open.  It is supposed to be inhabited.  Our footprints are supposed to be visible.  David Pollard said in his review of the book, “So read it.  Inhabit it.  Breathe in every word, because every word of this book is essential.  Let it animate you.  Annotate it to make it your own.  And then let it let you change yourself, and become who you were intended to be.  Begin now. You have no time to lose.”

Annotate it to make it your own?  Oh Lordy.  I can’t even crayon up a coloring book!

Yet here I am … a purple-ink pen perched in my trembling fingers (because purple is such a conversational color).   I hover over a page on which I have something tiny to say.  Just a little thing, really — a mousy squeak from what has been a perennially silent voice when it comes to writing or coloring in books.

And — THEN — I draw a box around a word that I have carefully selected … margins.

It’s just a small box, around just that one word, but with that teeny, yet trembling gesture  … I.  Am.  Liberated. 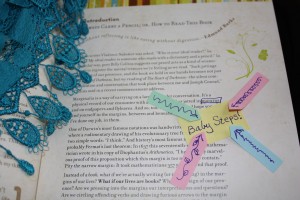 0 thoughts on “Writing in the Margins”