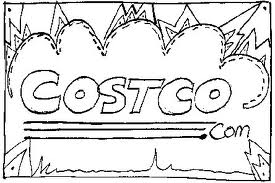 Since I’m no longer mistaken for a young woman, I’ve decided it makes sense for me to join my retired colleagues who spend their days cart-cruising the aisles of the local Costco.  One would think that weekday shoppers would be sparse in number, but here in Snowbird Country, we belie the concept that weekday mornings are uncrowded and thus a good time to get one’s shopping chores done quickly.  Nope.  We of the gray hair and comfy drawstring cotton pants are Legion.

We push our carts … or drive our Hoverounds … up and down the aisles with wild abandon.  We’re Boomers and Zoomers.  Wheeee!!!

We load up with giant things, most of which will only get tossed after a week … double packages of bagels and breads, huge  jars of spices, canned vegetables by the case and rolls of toilet paper by the dozens, 20 pound sacks of potatoes, boxes of frozen goods guaranteed not to fit in even the largest home freezer, packages of socks that are impossible to resist, not because they’re especially cute, but rather, because of the price per pair.   Books.  Best sellers by the truckload.  It’s all big, but somehow everything seems dwarfed into seemingly manageable  segments because of the size of the big box in which we are all wheeling our burgeoning carts.

By width, breadth and height, it’s one huge place.

Then there are the food samples.  At the end of each aisle, kind folks serve up tidbits of edibles in little ruffled paper cups — Saltines spread with various spreadables, portions of potted meats or warmed-up burritos cut into bites with orange-handled scissors, a spoonful of chicken noodle soup, two or three oddly flavored almonds, a sampling of the latest unpronounceable liquid concoction guaranteed to pep one up or slim one down.  We press in and descend upon these little cupped morsels like a circling murder of crows.

After we’ve loaded our baskets and eaten our way through the big box that is Costco and after we’ve stood in line to pay for the enormously-sized items in our carts, we make one last purchase.  We stand in another line to buy their famous but still ordinary foot-long hot dog and a Coke.  $1.50.

And that is what the retired in my neighborhood do.  Each weekday we swoop into Costco and walk the aisles, pushing huge carts into which we heap huge items, all the time wearing huge amazement on our faces at how many other people are also out shopping on a weekday morning.